Welcome to February’s Progress Report! This month saw smaller number of contributions from our regular developers as most of the improvements were still a work-in-progress that required further tweaking before they could be merged in the upcoming months. That’s not to say this February didn’t have big improvements though. On the contrary, this month kd-11 finally implemented the much anticipated On-Screen Keyboard while GalCiv managed to emulate multiple PlayStation 3 accessories using regular controllers. If that wasn’t enough, thanks to the multiple other performance improvements to the emulator, exclusive titles such as Genji: Days of the Blade have seen a huge uplift in performance.

In addition to the following report, further details of Nekotekina and kd-11’s work during February and upcoming contributions can be found in their reports on Patreon. This month’s Patreon reports are:

This month saw RPCS3 reach another milestone in game compatibility with the Ingame and Playable categories cumulatively crossing 85%! This was largely thanks to the conscious efforts of testers to retest all games in Intro, Loadable and Nothing categories and report issues faced to the developers. Once provided relevant causes, our developers were able to fix issues plaguing many of these titles. Their efforts paid off with the Intro category decreasing by 66 titles. But this is just the beginning, with further work being done to improve these titles.

On Git statistics, there have been 2209 lines of code added and 447 removed through 21 pull requests by 9 authors.

Like any console, the PlayStation 3 had a host of accessories and toys that could be connected for additional functionality. This include accessories such as the Guitar Hero guitar controllers, Rock Band drum kits, SingStar microphones, Logitech Driving Force GT racing wheel and even toys such as the Skylander Portal. Sony also released their own set of peripherals such as the PSEye camera and PSMove motion controller along with the DualShock 3. While all peripherals connect to the console through the USB port, they are handled differently by each game. The PlayStation 3 allows developers to handle these peripherals by two methods, either through specialized libraries (such as cellPad, cellMic, cellGem and cellCamera) or by communicating directly with the USB device through cellUsbd.

In RPCS3, the cellPad library was the first to be implemented along with the Pad handler (using input APIs such as XInput, MMJoystick, evdev) and have games detect input as if it were from a DualShock 3. Using these APIs ensured that RPCS3 would be able to recognise any controller that complied with these APIs. While the other libraries have also been implemented to varying degrees, more work is required for RPCS3 to support these peripherals.

Or so we thought, until AniLeo, our community manager, noticed that he could get Guitar Hero 5 to recognise his GH guitar controller using the MMJoystick API by forcing cellPad to return a value (through cellPadPeriphGetInfo & cellPadPeriphGetData) indicating that the connected pad was a guitar. The erstwhile implementation of cellPad passed all inputs received as if it were inputs from a DualShock 3. AniLeo then passed this information on to GalCiv who quickly implemented a simple drop-down menu in the Pad configuration to allow users to select the type of peripheral they wish to emulate.

Users should be note that these improvements only benefit titles that detect input using the cellPad library. A few titles (most notably the latest Rock Band games) use cellUsbd, instead of cellPad, to directly communicate with the guitar controllers and drum kits. However, not one to leave a job unfinished, GalCiv is now hard at work on implementing microphone support through cellMic and also sys_usbd (lv2 syscalls used by cellUsbd). Once finalised, users will be able to use peripherals such as the Skylander Portal and SingStar microphones while also being able to emulate regular microphones as pseudo SingStar microphones!

Back in January 2018, kd-11 decided to implement a native UI for RPCS3 which allowed overlay interface elements to be displayed on top of games. Prior to the native UI, these interfaces were implemented through Qt dialog boxes that would pop-up during gameplay. While these pop-ups gave users the necessary functionality, it suffered from certain drawbacks. For one, these dialogs can only be interacted with using keyboard and mouse, so users looking for a console experience were left with much to desire. The second issue was the fact that, when in fullscreen mode, the message dialogs would in fact appear behind the game and users were given the impression that the game was stuck when it was simply waiting for input. To address these issues, kd-11 implemented a native user interface within the same context frame allowing users to interact with various interfaces such as the save/load menu and message dialogs using a controller.

While most of the functionality was ported over to the new native UI, the On-Screen Keyboard interface was excluded as it required significant rework to the existing implementation. On-Screen Keyboard functionality was implemented with the Qt dialog interface in January 2017 but required users to use a physical Keyboard to input text when prompted. Since the native UI did not implement the same, users were unfortunately still denied the console experience. However, not wanting to leave the task half done, Megamouse improved the implementation of both the Qt dialog interface as well as the native UI interface culminating in the large-scale refactoring last month, all with the goal of facilitating a smooth implementation of a native On-Screen Keyboard in RPCS3. 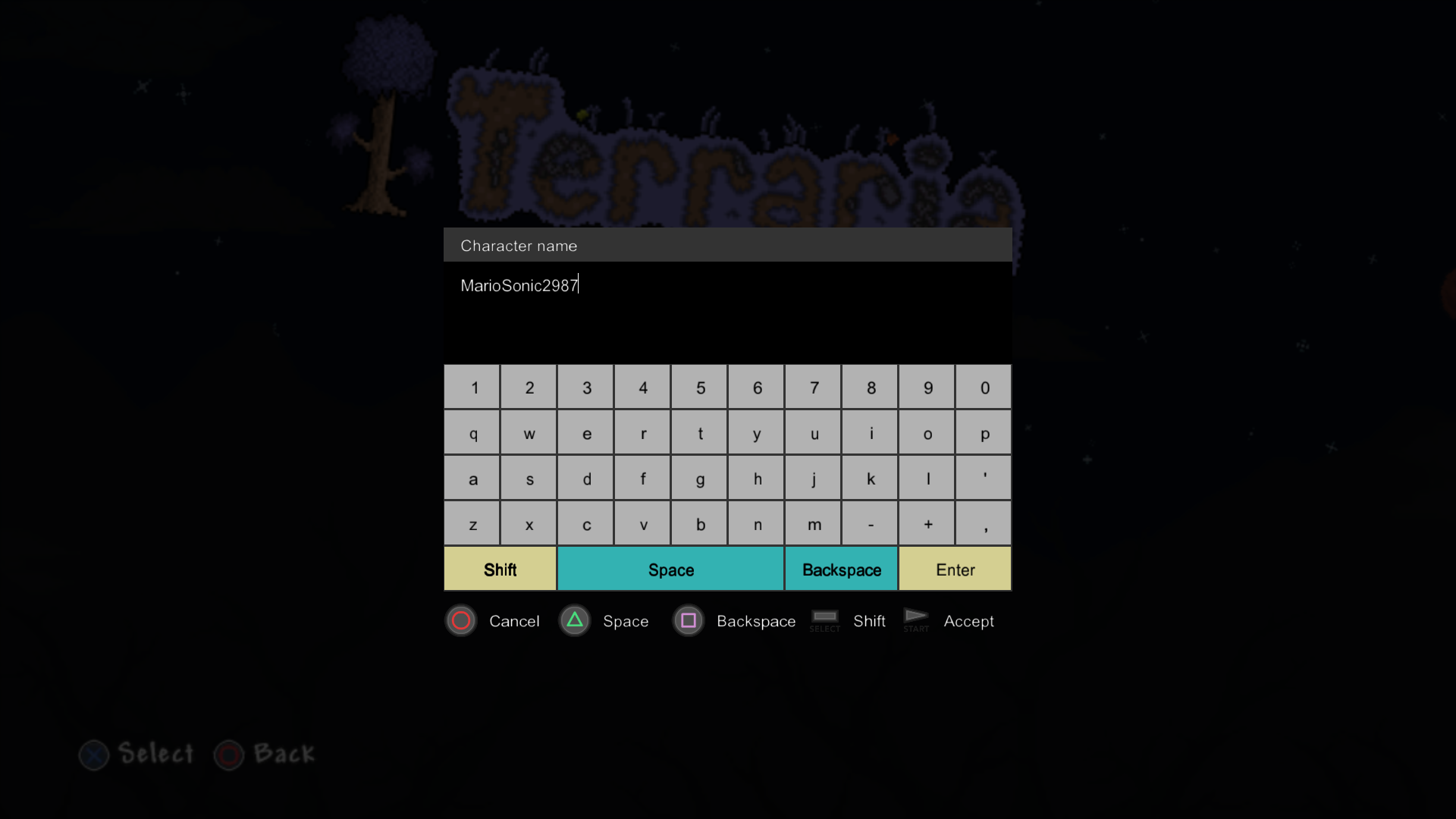 However, the native UI had a long standing drawback of only supporting characters from English. With this limitation extending to On-Screen Keyboard, latin characters (such as áëéñüùç) and Japanese glyphs were not rendered and instead simply replaced with blank spaces. To workaround this limitation, kd-11 stripped all unsupported character and replaced them with the ‘#’ sign. Next, he upgraded the text rendering system to use extended ASCII character encoding allowing many more characters to correctly render. This allowed for text in languages such as French and Spanish to correctly render now.

Characters from unsupported languages like Japanese will be demarcated with the ‘#’ sign and users will be required to use the erstwhile Qt implementation for full compatibility. However, further improvements were made to the native UI to reduce the number of ‘#’ sign being displayed by identifying spaces and punctuations in full-width languages such Chinese, Japanese and Korean and mapping them correctly to their half glyph counterparts. 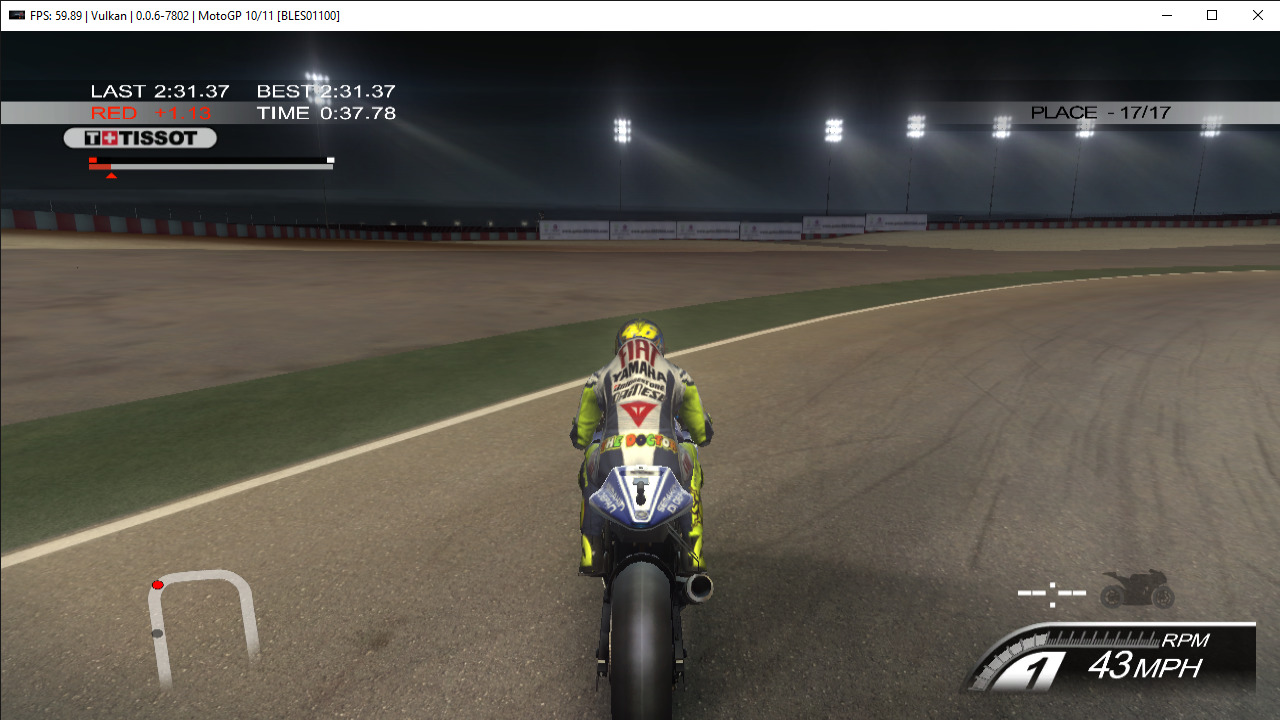 The PlayStation exclusive title, Tokyo Jungle, is now fully playable! Previously, this title would freeze shortly after going ingame but with recent compatibility improvements, this title now with runs at full speed even on mid-range hardware. Check out some gameplay footage below:

This month also saw the action racing title GripShift move to playable. This console exclusive previously suffered from broken graphics and poor performance but recent improvements have fixed all such issues. Do remember to set framelimiter to 60FPS, as this title now runs well over 200 FPS! Genji: Days of the Blade

When Genji: Days of the Blade went in ingame in late 2017, it suffered from various graphical issues and the characters were stuck in a T-pose. However, thanks to all the improvements made to the emulator since then, this title performs much better. While performance has improved, further testing is required to determine whether this title is indeed playable. In the meantime, check out this title’s current performance here:

MX vs. ATV Alive went ingame for the first time this month. This marks the milestone of all titles from the off-road racing series MX vs. ATV to now go ingame. Sadly, the game suffers from severe graphical glitches keeping it well away from the Playable category. 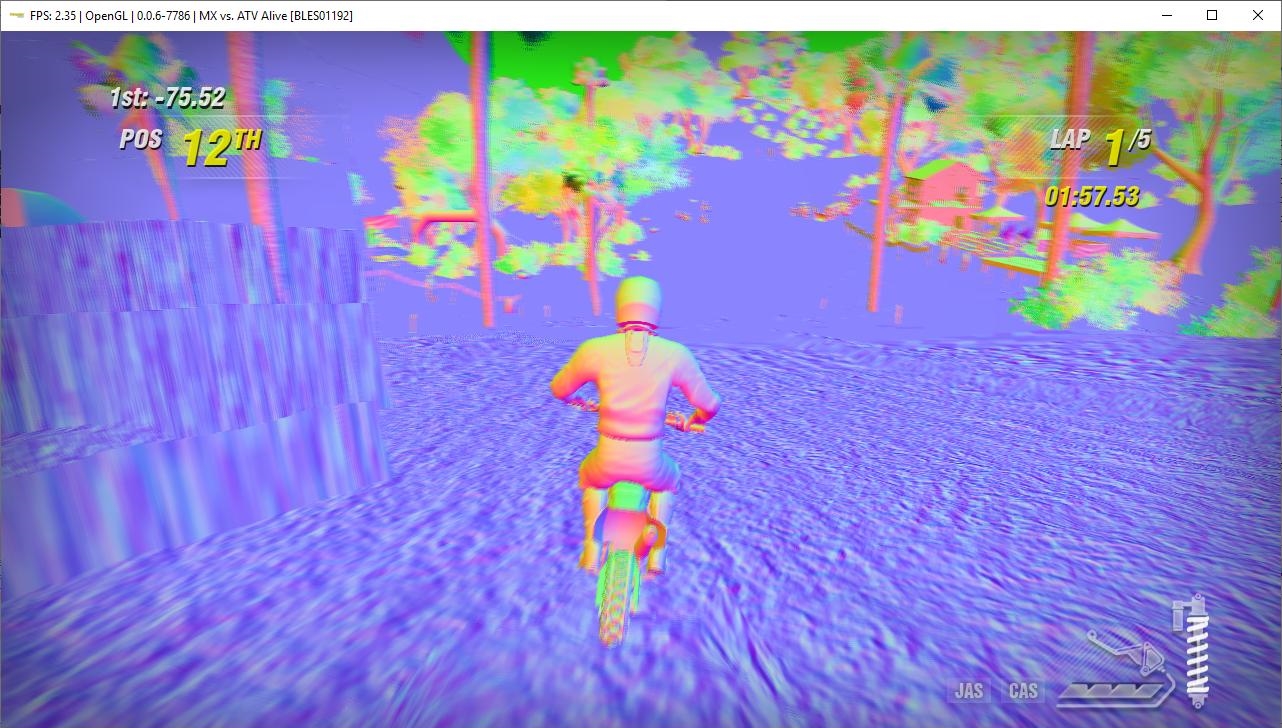 A spin-off involving character from three notable franchises, Gundam, Kamen Rider and Ultraman, this title was found to go ingame this month. Further testing is necessary to ascertain whether it is playable on RPCS3. 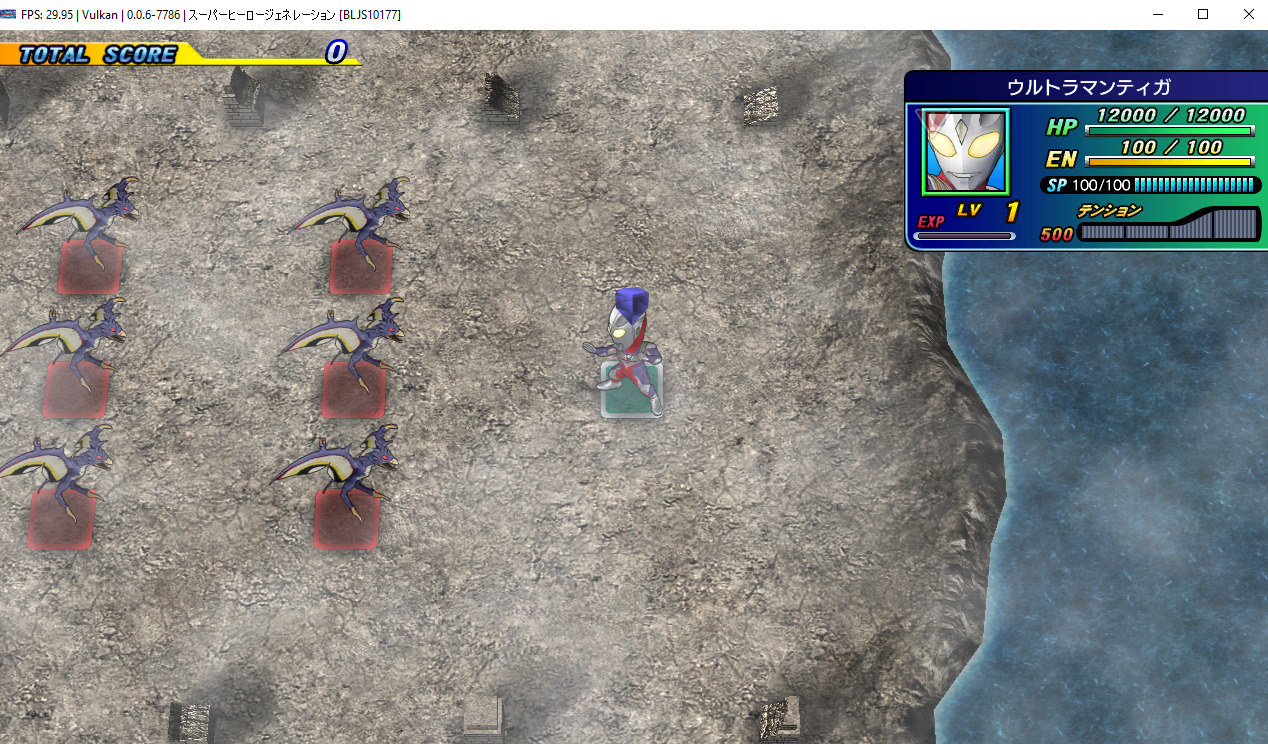 There have been numerous other pull requests merged during the month that couldn’t make it to the Major Improvements section. We have collected a list of all such improvements here, and attached a brief overview to each. Make sure to check out the links provided for them if you are interested, as their GitHub pages usually uncover further details as well as the code changes themselves. To see this whole list right on GitHub, click here.

5635 – Fixed usage of VK_IMAGE_LAYOUT_GENERAL by properly synchronizing transitioning to and from General layout. General layout requires full pipeline dependency due to its general usage and as such, should be largely avoided.

5285 – Implemented static function hooking for memcpy, memset, memmove and memcmp. This can be activated by enabling Hook Static Functions in the Debug tab of the Settings menu;

5643 – Unlike usual threading norms, SPU groups initialization process can be terminated infinitely instead of once. Before this improvement, call join could be done infinitely after a termination without waiting.
This was discovered to be incorrect as once a join was called, the termination signal is cleared and another signal need to sent before the next join could finish as well. This has now been implemented accurately which also simplified the termination process;

5645 – Fixed a minor race condition introduced by the above pull request. When the SPU group is in an “almost” finished state before sys_spu_thread_group_join is called, there was a small time gap where calling the syscall would return from execution before all threads are terminated completely;

5667 – Fixed a race condition when error codes are returned and the error value is dependant on external access in a specific mode of the syscall. This mode did not work prior to PR 5623 and hence the race condition was concealed. Once the mode was correctly implemented, the race condition manifested as a perceived regression in Demon’s Souls which was fixed as well;

5542 – Improved accuracy of cellSysCacheMount considering the scenario when cacheId is empty and system cache is supposed to be cleared. This improved allowed NBA 08 Demo to progress from Loadable to Intro!

5620 – Fixed a bug where the “Open custom config location” option pointed to the previously used folder instead of the current folder;

5656 – Improved appdata.xml by adding URLs to the GitHub issue tracker and Quickstart guide, and a screenshot of the emulator. RPCS3 now passes appstream-util validation.

Apart from the amazing work by GalCiv to support more peripherals, elad335 has also been working on improving compatibility of the PPU LLVM recompiler. With games being able to fully utilise the Recompiler, the performance uplift is night and day to say the least. Keep your eyes peeled on our YouTube channel for further updates!

Here’s a sneak peak at one of many gems that benefit from this improvement: 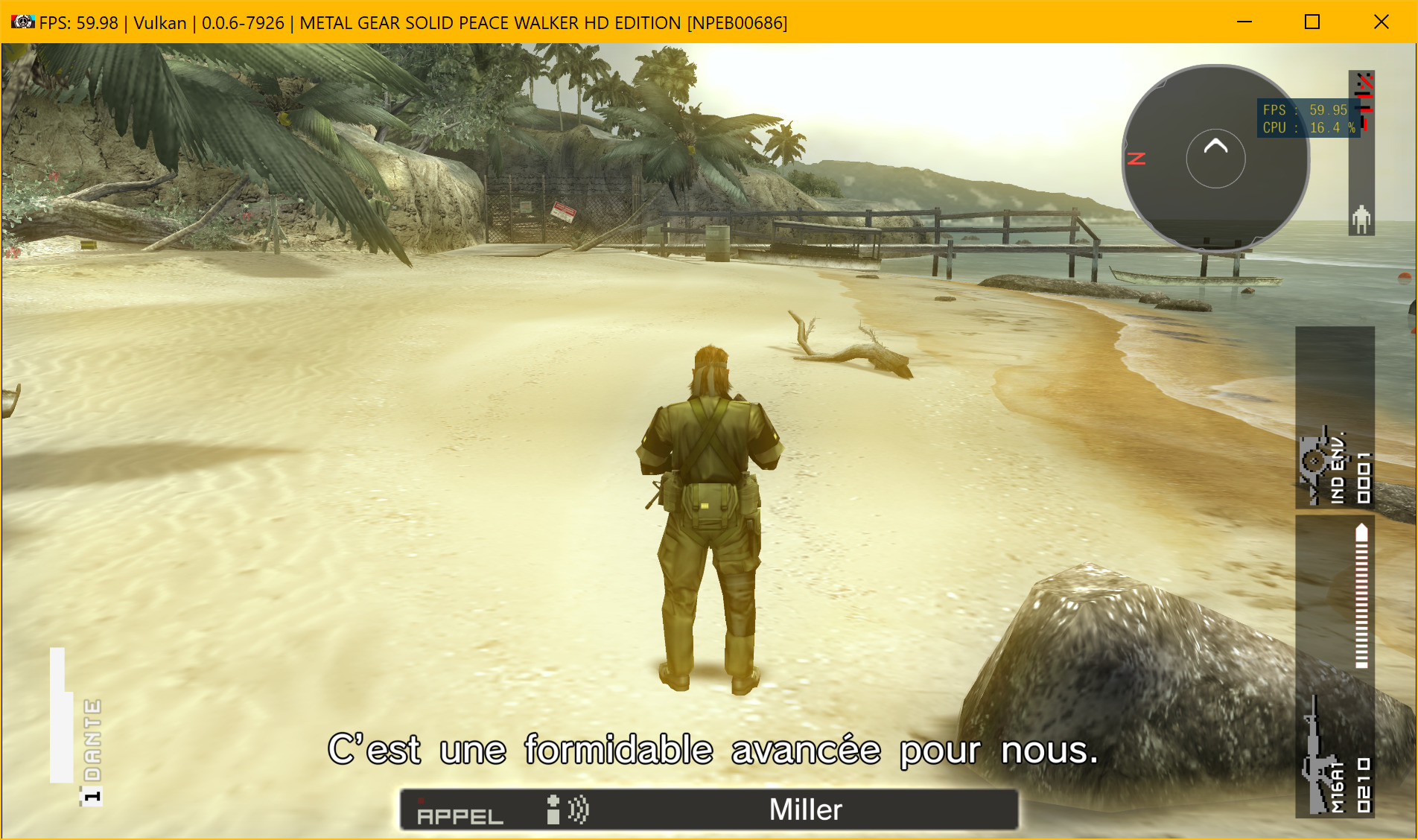 If you like in-depth technical reports, early access to information, or you simply want to contribute, consider becoming a patron! All donations are greatly appreciated. RPCS3 now has two full-time coders that greatly benefit from the continued support of over 800 generous patrons.

We’re always looking for dedicated writers to help us write these reports. If you have the skill, time and are willing to help, please apply here. Also, come check out our YouTube channel and Discord to stay up-to-date with any big news.