Hello, I’m Whatcookie, an RPCS3 contributor. I’m here today to talk about the brand new 60FPS patch for Demon’s Souls. But before we discuss the details of the patch, let’s first take a look at some 4K 60FPS gameplay:

Demon’s Souls has long been one of the most popular titles for RPCS3. When it went ingame for the first time it made gaming headlines everywhere. I had been following RPCS3 pretty loosely at the time, but when Demon’s Souls went ingame I finally tried out the emulator. Back then the graphics were quite broken, and I was lucky if the framerate went over 20FPS. But despite all that it was still amazing to me. I thought to myself “Wow, it will be so incredible when the game is playable at 30FPS… maybe in 2 years or so”. The game ended up being very playable much earlier than I expected, all the way back in 2017. Since performance was so solid I thought that it would only be a matter of time before someone out there would make a 60FPS patch.

Fast forward 2 years and there still was no (proper) 60FPS patch. And I had already started to contribute to RPCS3, and created a patch to unlock the framerate in NieR. I assumed that a framerate patch for Demon’s Souls must be impossibly difficult since the only 60FPS patch that was made broke the gamespeed and caused everything to run twice as fast. On a complete whim, I decided to try running Demon’s Souls with the new generic FPS unlocking methods by developer eladash. I knew that since the game used a fixed timestep instead of delta time, the game wouldn’t be playable at proper game speed but I was curious about just how much faster Demon’s Souls was compared to two years ago. Since I’ve had the same quad core desktop PC since the start of 2017, I would be able to see just how much the software has improved. 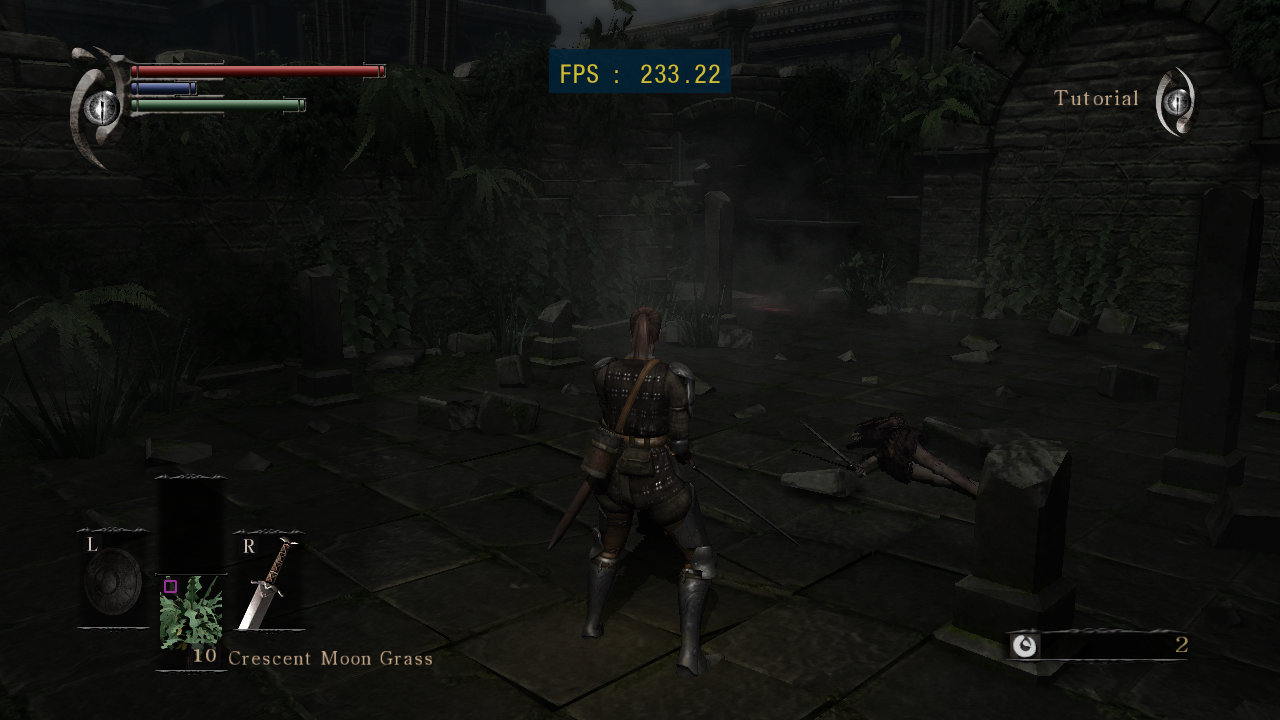 Turns out RPCS3 has gotten a LOT faster over the past 2 years!

“Wow, RPCS3 is really fast now. But it’s midnight now, I’ll try investigating a patch for proper game speed at 60FPS tomorrow.” I said to myself. Next morning, before I got breakfast I had the game running at proper speed with high framerates.

The patch simply changes the amount of time that’s advanced each frame from 33.3ms to 16.7ms. Since the patch is meant to be used with Vblank at 120 which doubles the max framerate, this lets us get a correct game speed at 60FPS. After that, it is then necessary to set Clocks scale to 200 to re-enable the games internal frameskipping at 60FPS, without which you will drop game speed every time your computer can’t hold 60FPS. I’ve also included another line that’s commented out by default (has the symbol # at the start of the line) which sets the timestep to 8.3 ms. This is meant to be used with Vblank at 240 and Clocks scale at 400 for proper gamespeed at 120FPS.

Warning: The instructions mentioned below are outdated. Click here to visit the Patch repository on our Wiki for the latest patch.

I’m sure you’re itching to play Demon’s Souls at 60FPS by now so let’s go over all the steps you’ll need to take to get it running on RPCS3:

Be sure to check for the ideal settings for this game in our wiki. RPCS3 advances fast and the ideal settings may change from week to week. With the patch enabled at 60FPS, I’m able to get a locked 60FPS 95% of the time on my i7 7700K. If you have a Ryzen 3000 or i7 8000 series desktop CPU then you can reach 60FPS 99% of the time. Of course as the emulator continues to improve further, the system requirements will continue to drop lower and lower.

Users should also note that the FPS counters are inaccurate with Demon’s Souls as the game will automatically output duplicate frames when the framerate drops below its FPS cap. It is for this reason that FPS counters, even third party software like Afterburner will improperly report 60FPS at all times with the patch enabled because the game is outputting duplicate frames. This is not a bug, its just an unfortunate result of how the game works. To properly measure frame-rates you will need to use tools to analyse video footage, or enable the debug overlay and look out for when the draw calls change.

I hope you enjoy the patch. It’s been killing me since I’ve had to keep it secret for a few days so that we could make this blog post and the YouTube video. If you’re happy with the patch then please consider making a donation to our Patreon. https://www.patreon.com/Nekotekina While RPCS3 is already stable and performant enough to run games such as Demon’s Souls at 60FPS, there’s no end when it comes to things that can be improved when talking about emulation of a system as complex as the PlayStation 3.

If you would like to contribute to the project, you can do so either by contributing code, helping the community or becoming a patron. RPCS3 has two full-time developers working on it who greatly benefit from the continued support of the many generous patrons. In exchange, patrons also get special support over on our Discord server and get access to early updates directly from our lead developers. If you are interested in supporting us, consider visiting our Patreon page at the link below and becoming a patron, or join our Discord server to learn about other ways of contribution.

Also, come check out our YouTube channel and Discord server to stay up-to-date with any big news.