Welcome to August’s Progress Report! Firstly we would like to apologize for the delay in publishing this report. RPCS3’s progress reports are solely written by volunteers and a few of our regular writers could not contribute to this report due to personal commitments. If you hate seeing RPCS3’s reports get delayed and would like to contribute to them, please apply here.

If you thought July was a big month for RPCS3, then prepare yourself for this progress report. This month saw 20 pull requests from eladash alone as he set a goal to have all his work merged in RPCS3 before his conscription service began. Not wanting to be outdone, Nekotekina and kd-11 also made a dozen pull requests each improving various parts of the emulator. We’ve got a lot to go over so let’s get straight into it!

In addition to the following report, further details of Nekotekina and kd-11’s work during August and upcoming contributions can be found in their weekly reports on Patreon. This month’s Patreon reports are:

August saw a major change in the way games are counted in the compatibility statistics with all online multiplayer games in the Intro category and below being excluded. This was done to better represent the state of the emulator’s progress as these titles did not work as the servers that they wish to connect to no longer exist. Thus, even if RPCS3 becomes 100% complete, these games will not work unless somebody sets up a private server and emulates the original server accurately. These titles are still present in the compatibility list and are represented with a lightning bolt symbol next to their title. While they will still show up in all search queries, they will no longer be included in our statistics to showcase a more accurate picture of RPCS3’s development.

Moving on to actual improvements, our testers finally picked up the slack from the past few months and extensively tested the Ingame category which gave the Playable category its largest increase of the year. Every other category saw large decreases with Ingame shedding 88 games and Intro and Loadable recorded one of their largest drops ever percentage wise with drops of 17% and 20% respectively. An effort was also made to merge duplicated titles in the compatibility list which also aided the drop in these categories. As mentioned in the previous month’s progress report, the Nothing category doubled in size to 4 games due to erroneous tests, but this has since been fixed bringing the category back down to 2 games. 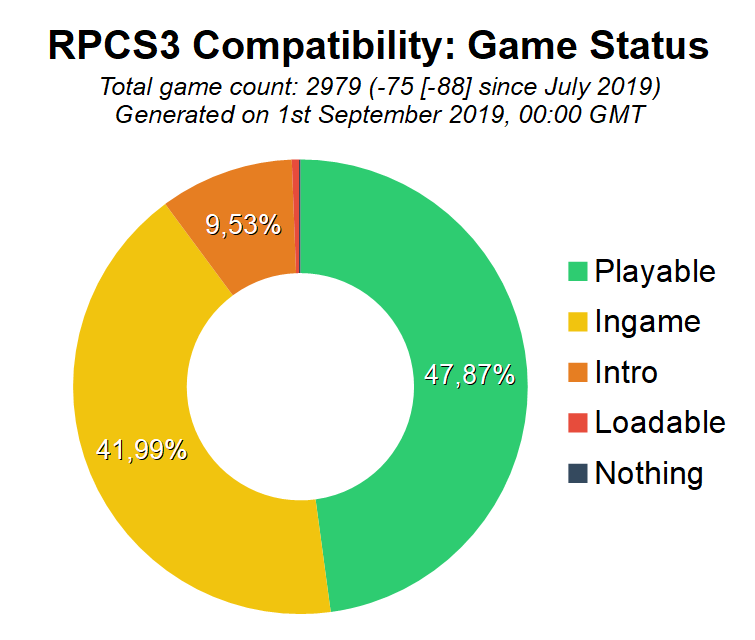 On Git statistics, there have been 8536 lines of code added and 5418 removed through 71 pull requests by 15 authors.
END_OF_DOCUMENT_TOKEN_TO_BE_REPLACED